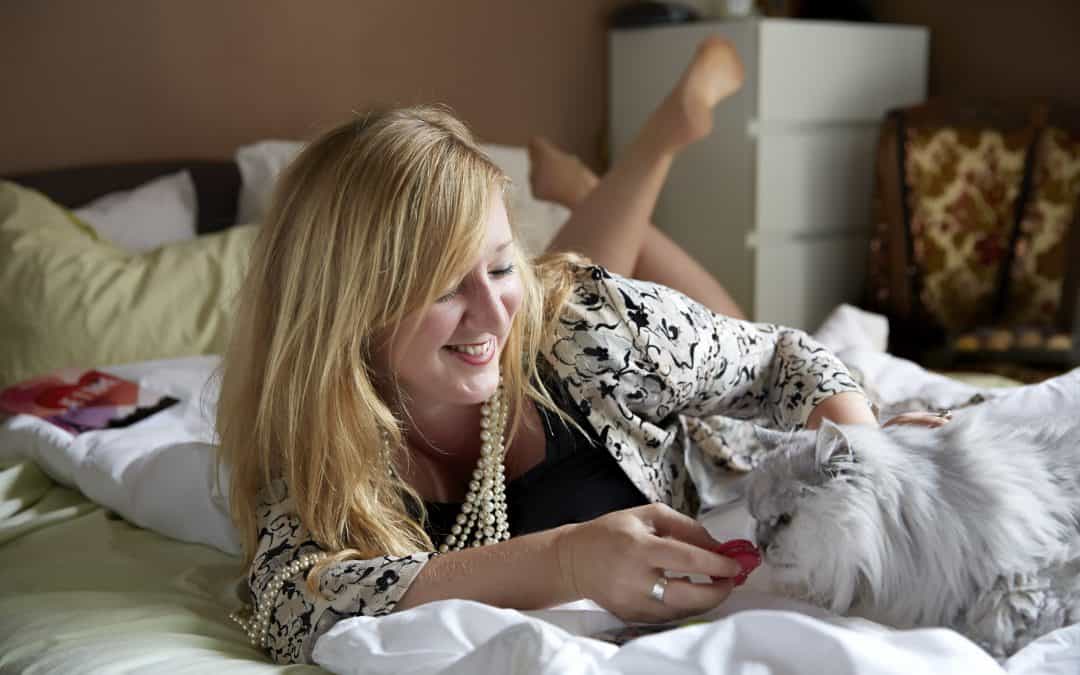 Ask someone to characterize Paris and “romance” is usually at the top of their list of adjectives. But while most people’s vision of French amour looks a bit like a fairy tale, Paris’ foremost romance writer, April Lily Heise, in her romantic misadventures as her alter ego, Lily la Tigresse, has figured out that finding and keeping love in the capital city is more complicated than a glossy Instagram post makes it look.

In my lively interview with this most saucy and spunky accomplished woman and author of the two books, Je T’Aime, Me Neither and Je T’Aime…Maybe?, you’ll see Paris through the eyes and experiences of this Montmartrois (i.e. a person who lives in the city’s 18th arrondissement of Montmartre).

Robyn: So, who is Lily la Tigresse and how did she come to embody the Lily Heise that I know?

Lily: I’ve always been a little sultry and seductive. I somehow tumble into romantic adventures. I’m flirtatious. But I’m not a vamp, nor a man-eater. I do have this strong sultry side to me. It’s a cute little nickname, like a lovable cat. It embodies who I am because I’m not a shy mouse or a wallflower. I’ve been like this since I was young. I grew up in countryside and spent time with make-believe friends and had adventures. When I was a kid, I was in school plays and I had funny little roles. I embrace the funny cheeky side to my personality and I make as much fun of myself, more than anyone else. But I do choose the face I’d like to show people, so you might get the sweet me, or the sly me.

R: I think I’m getting a bit of both right now.

R: How did Paris become all things romance? I mean, really, a city that features sewers and catacombs as tourist attractions, where’s the love in that?

L: There is a great book, by Elaine Sciolino …

R: I love Elaine Sciolino; she wrote the acclaimed book, The Only Street in Paris.

L: Yes, she did, but before that great book, she wrote La Seduction: How the French Play the Game of Life. In it, she writes about medieval times-knights in shining armor, troubadours. This led to accentuated expressions of love and following one’s passion and also mistresses being accepted. Being gallant and dueling over your girlfriend was standard, typical. This was the foundation of romantic love in Paris.

R: Then what makes a romantic spot in Paris; give me your three criteria that make it so?

L: Here’s my 1-2-3 … Number one, it’s a place away from the crowds. Number two, it’s special for some reason. Number three, ambience. So, let’s take the Eiffel Tower, often thought of as the most romantic spot in town. It’s not really; it is just too crowded. But leave the tower and walk under the quais and there are far less people about … now that’s romantic! To walk along the river is to appreciate romance. Walking along Seine is not cliché, nor do I consider it a just a touristy thing to do. It has everything: ambience, no cars or motorcycles. Other spots romantic spots are the south part of the Latin Quarter and the back side of Montmartre.

R: And what would be your very special place?

L: Ok, here’s a little insider spot … and this is a way to combine a most quintessential sight in a special way. At the Hotel du Sully, a private mansion, one of the nicest examples of a hotel particulier, is a place that’s listed in tourist information. Now, what most people don’t know is that if you walk in from the street side on rue Saint Antoine, walk through the building, it will lead you to back gardens that will take your breath away. There’s even a wall that has these tiny sparrows and best of all there is secret passageway that leads to then to the famous Marais square, the Place de Vosges. Now that’s romantic.

R: So, you are with your intended in a dreamy location in Paris, how is your experience of love as a Parisian resident different than love and romance in the US?

So, say you’ve met a French man and you want to take it slow, start small, have a first date in afternoon, like a coffee date. Allows you to go slower. Not always easy as an Anglo woman. Although I have lived in Paris for many years, I am Canadian. There are some of the funny events that happen in my books when I am torn between my North American sensibilities and French desire.   I’ve always try to keep a little mystery, let things draw out a little more so I can stick to my principles, so early in day in dates work.  French men like the chase, so play it cool a little bit, that will make them fall harder and helps you balance your desires.

R: In your books, you aren’t exactly swept off your feet by some dashing Frenchman. In fact, your books remind me more of the trials and tribulations a la Bridget Jones. So, what’s your take on romance in Paris present day – is romance dead or alive?

L: Hate to burst anyone’s Instagram bubbles, but Tinder is gaining in popularity in Paris, and I feel has taken the magic out of meeting people. It’s made romance disposable. The old ways of finding a partner is dying out a little, but people still meet people organically. People don’t really meet in classes but in thematic groups, like the expat groups in Paris is a great way to socialize. You won’t meet someone at the gym … except maybe in the gay populations.

R: The greatest pick-up line used on you?

L: French men sometimes can be a little corny, but no man has ever said, “Did it hurt when you fell out of heaven?” More easy things like asking for the time or for a light.

R:  What cities are more romantic than Paris and why?

R: Is everything you write directly from your life experiences?

L: Maybe one day I’ll write about my eclectic childhood. Maybe that would take several books. But yes, my books are based on reality; they are 95% true … just some of the time frames may have been genetically modified.

R: What spot in Paris is the clincher for making your intended fall in love with you?

L: I would say, Pont Alexandre III Bridge. This is the bridge that extends from Grand Palais to Invalides. So, while it may be right smack in the middle of busy Paris central, it’s surprisingly never mobbed with people. If you look at the beautifully playful water nymph sculptures plastered to the sides of the bridge, when it’s lit up at night, with a beautiful view of the Eiffel Tower, it’s irresistible. In fact, it’s beautiful all the time, day or night. It’s a great proposal place. No mass tourism goes there, despite it being a connecting point to main tourist sites.

L: I think witty intelligence, someone who is clever and interesting. I also melt for Chateauneuf du pape wine. So, if a witty intelligent man comes with the wine, well then that’s melty, melty. In my second book Je T’Aime…Maybe? there was a wine maker that intrigued me with surprises, so read the book. It’s in the chapter “Wine Not.”

R: How have you changed from a Canadian to a Parisian? When did you know that Paris was home?

L: I did part of my studies in Paris in an exchange program when I was quite young. Fell in love with Paris then. Those three months in Paris in my 20’s, that’s when I knew. I was less occupied with bureaucracy back then and it was easier for me to settle into Paris. I’m interested in culture and arts so going back to Canada is not the same for me now. Whenever I do return to Paris from a visit from Canada, and step off the metro, I know I’m home.

R: Ok, time for a lightening round … Champagne or wine?

R: Describe in one word your approach to eating?

R: What sound do you love?

L: Good at hairdos, but I’ve cut men’s hair three times and each time it was disaster.

L: Montmartre of course, I live here. This is home.

To read the hilarious misadventures of one Lily la Tigresse, you can order both her books here: