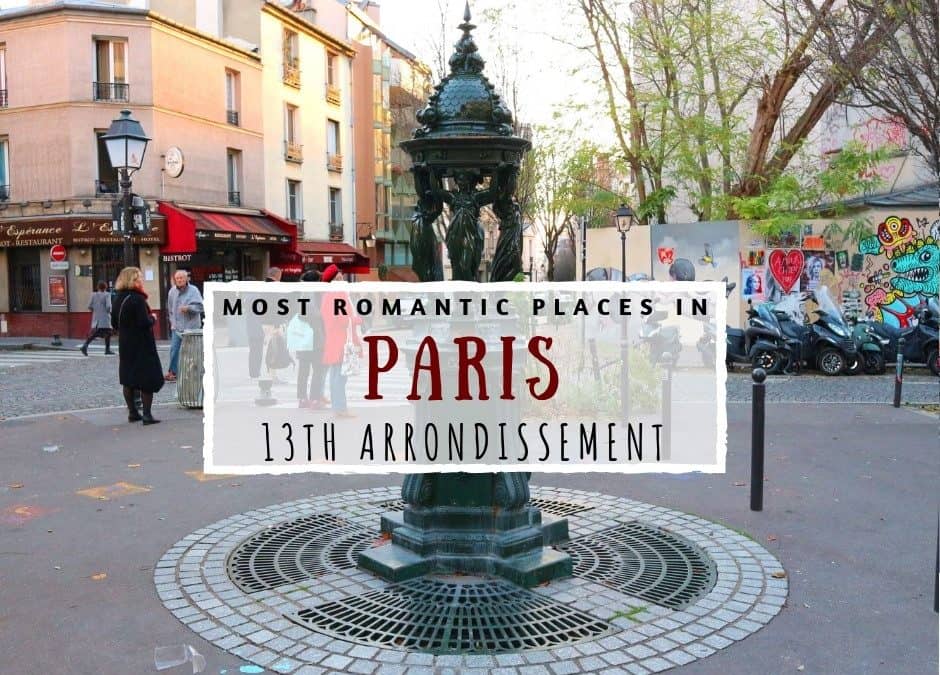 Paris has always been synonymous with romance. But when asked what the most romantic spots in the capital are, invariably it is always the Eiffel Tower or one of the many ornate bridges that dot the city.  However, for true Parisian romance, the locals turn to their own neighborhoods for the treasures we mortal tourists have no clue about.  Fortunately, I am well connected to such locals and one in particular.

My dear friend, romance writer extraordinaire Lily Heise, knows every nook and cranny of love in every arrondissement. She was so gracious to allow me to share her exclusive guides with my dear readers and so I now present to you, Part 1 of Romance in Paris.  The 13th arrondissement has been mostly known as quiet neighborhood most tourists would never venture into. It’s also home to a small Chinatown that one would hardly call romantic.  But Lily, through her fine-tuned sleuthing skills, has found irresistible spots you must visit.

So, leave the Eiffel Tower to amateur lovers, hop on le metro and let’s go in search of adventure in the 13th arrondissement…

Occupying the far southeast of Paris, your first impression of the 13th might not be one of romance, however, if you overlook the unfortunate 1970s high rises around “Chinatown,” there are actually many wonderfully romantic treasures around the district. Outside the city limits of Paris and formerly dotted with little villages and convents, an important feature of the 13th was the Bièvre River, Paris’ second river, which was gradually filled over during the 18th and 19th centuries due to pollution from the tanneries and factories that bordered its banks (it still flows underground and into the suburbs). The arrondissement is home to the mammoth glass and steel Bibliothèque Nationale, the French National Library — hardly romantic, however, its arrival in the 1980s helped put the district back on the map. It also instigated the more recent cool-i-fication of its vicinity in the form of bars at the library’s footstep along the Seine, a whole new neighborhood of avant-garde architecture and a flourishing of incredible street art. Put on your walking shoes and get ready to seek out the top romantic spots of the 13th arrondissement below! 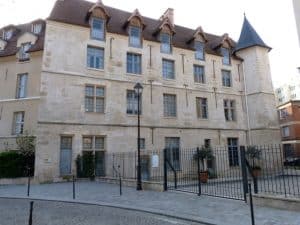 Few people know that tucked away on a quiet side street around the corner from Les Gobelins tapestry manufacturer, and once bordering the Bièvre River, is a castle. Le Château de la Reine Blanche or the Castle of the White Queen (6 Rue Gustave Geffroy, 75013) was built in 1290 by the Queen Marguerite de Provence, although it owes its name to her daughter, Blanche de France who inherited the manor house. The castle is currently privately owned and rarely open to the public (check on the Journées du Patrimoine in September), but you can thankfully view it from the street — the perfect place to steal a kiss and fantasize about Medieval Paris, which can be carried on at the next stop… 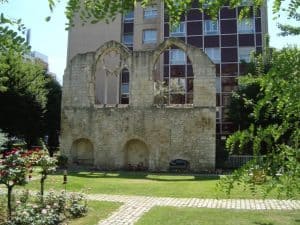 A short stroll from the above are the beautiful remains of the couvent des Cordelières, a convent founded at the end of the 13th century by the aforementioned Queen Marguerite de Provence, conveniently located next to her home. Damaged during future King Henri IV’s siege of Paris in 1590, two hundred years later revolutionaries put an end to the structure’s religious functions and it was later converted into a hospital, a purpose it still retains. Most of the medieval buildings were sadly torn down in the 1970s to make way for the current new hôpital Broca. Fortunately some lovely ruins survived this destruction, which you can see by either going into the hospital (54-56 rue Pascal) and into the gardens to get up close or view from street around the corner on rue Julienne. 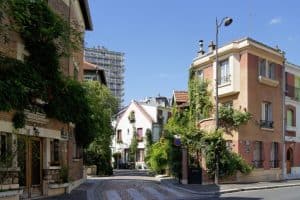 There are a number of clusters of old Paris in the 13th and one of my favorites is the Cité Florale. Located in the very south of the district, as its name implies, this is a picturesque pocket of winding villa streets named after different flowers. You can wander hand-in-hand with your sweetheart down rue des Orchidées, Glycines and Iris, admiring the cottage-like houses bedecked in flowers. The area isn’t too far from the 14th district’s Cité Universitaire and the Parc Montsouris which could be paired with it for an outing or it’s around a 15-minute walk from the above sites… and the last spot on the list!