WHEN TO GO TO PARIS

Is April the best time to visit Paris?

Does the time of year really make a difference when to come to Paris? After all, there is a wonderful saying that goes – Paris is Always a Good Idea.  I would agree, being in Paris any time of the year has its many pluses and I suppose it has its drawbacks too (although I usually overlook those, just for the chance to be in Paris!) But still, some people can only enjoy the city only in the summer and some would never be caught in Paris in August.  So when should you come? Ideally, of course when you can get away. But if you do have a choice, let’s look at all the seasons.

It can be cold, but never gets unbearably freezing. It does rain a lot, and it might even snow, but Paris is one of those cities that the rain won’t slow you down. It’s quite charming and a bit romantic when it drizzles. Just wear layers, never forget an umbrella and always duck into a warm café and have a hot drink to heat up your insides.

While there are limited outdoor activities, the famous ice-skating rink at the hotel de Ville (the city hall) is in full swing and is most festive. There is nothing like saying you skated in France. Indoor activities abound especially in the theatres and the circus is in town. You’ll be able to spend more time in museums and not feel guilty about missing out on spending time in the warm sunshine.

Special reason to be in Paris:

The sales! From mid-January to mid-February, the shops discount their goods during the annual winter soldes (the other time this occurs is in July-Aug). The bargains are truly too good to pass up. The stores are decorated beautifully and although always crowded, the interiors of Galeries Lafayette and Printemps are very stunning and are not to be missed. In fact, the whole city looks like a pretty gift; everything is warmly lit, and the holiday spirit is palpable.

You can also be in Paris for Valentines Day on February 14th– need I say more about being in the most romantic city in the world on this day.

If you visit the 13th arrondissement, you can experience the Chinese New Year. As this neighborhood has the largest Chinatown district in France, during mid-February, you could enjoy Chinese themed events around this area.

Costs: Winter air fare before Thanksgiving and before Christmas are very reasonable. Hotel and apartment rates are also good bargains. It is considered high season during both Thanksgiving and Christmas weeks and prices for airfare, hotels and apartments will reflect that. And of course, I can’t do anything about your holiday shopping impulses…. 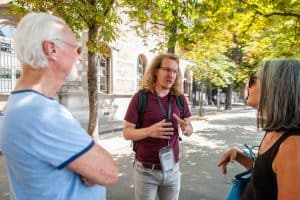 April in Paris? Why not, it’s a popular thought and typically the city delivers on its promise to be blooming with spring flowers and a brightness as the city thaws from the winter months. It’s a popular time for North Americans during Spring break and to celebrate graduations and weddings.

The weather starts to improve by March and the temperatures begin to rise.  You can still get rainy days and even a surprise snow shower. The weather in the early spring tends to be fickle-cloudy, sunny, cold and warm and that might be even in one day! By late spring, the weather improves, but even as late as May the weather can be chilly. Still, it’s a lovely time to be there and the chances of really cold weather are much slimmer than winter.  Wear layers and always carry an umbrella.

As the city becomes warmer, but outdoor activities are still limited, you could enjoy several annual events indoors.

Mid-March offers the Livre Paris. If you’ve been to Paris, you know this is a city that takes its books and reading seriously. This major cultural event brings almost 3000 authors that will sign and speak about their books with over 800 events to attend. It takes place at the Porte de Versailles.

At the end of April, it’s time for the one of the biggest events of year, the Foire de Paris (Paris Fair). It occupies the entire Expo Porte de Versailles in the 15th arrondissement with hall after hall of food, fashion, travel, arts and crafts and so much more.

At the beginning of April is the Art Paris Art Fair at the Grand Palais which bring in 142 galleries from 23 countries to show modern art.

Late May, when the weather improves dramatically, brings the Fete de la Nature, a five-day festival celebrating nature with a full program of 5000 free events in parks and gardens all over the city.

Special reasons to be in Paris:

Mid May, the annual Nuit Europeenne des Musees. This is when all over Europe that museums stay open until midnight for free! All kinds of special events including flashlight tours, live music, costumed museum guides and more.

June 21: Fete de la Musique! This is the annual all-night music festival that takes place throughout France, but in Paris the whole city is filled with music. Every space is occupied with live music of every kind. From the sidewalks of Paris to inside bars and cafes, the whole city comes alive with the sound of music!  It is, confidentially, my favorite festival of the year!

Costs: As the weather improves and the temperatures rise, so do the costs. However, airfare and lodging costs are less expensive early spring rather than late spring. But book early and you could reap the rewards for being an early bird. 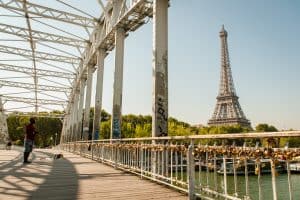 Ah… summer, when all North American descends into Paris. Well, its for a good reason. It’s the time most North Americans have vacation time. Since school is not in session and Paris is so family friendly it’s crowded. But the city feels electric with all this hubbub, especially in July. But come August, the city will feel less hectic as Parisians will take their holiday even if not for the whole summer.

I must say this past 2018 summer season was brutally hot.  I can never remember such a hot summer and I have been going to Paris every summer for 20 years. Usually the weather does see some hot days, but this past summer had a prolonged heat wave. Still, when the weather isn’t too hot, it’s downright gorgeous and pleasant, reminiscent of a Miami winter day.  Air conditioning is still a precious commodity, but most hotels and major sites will have moving air. Be aware though, the air conditioning isn’t as cooling as it is in North America (personally, I think we blast the air conditioning too high here in the States). If you are lodging in a Paris apartment, be sure that there are least several fans for your use.

Don’t forget to pack your swimsuit, as you can enjoy the sun worshippers on Paris Plage! Paris Plage is the made “beach” on the Seine. They import sand, palm trees and volley balls and so you too can feel like you are in the tropics in the middle of Paris.

Be an onlooker for the finish of the Tour de France! The annual event sees throngs of race lovers along the Champs Elysees. Be part of the fun and get there early for a spot. The date varies, but the race finishes at the end of July.

Cinema en Plein Air (open air cinema festival). Bring a blanket or a chair and scoot right up to the giant screen set in Parc Villette in the 19th arrondissement and enjoy the shows. Most are French films with English subtitles, but even if one movie isn’t in your native tongue, go anyway; its great outdoor fun.

Special reason to be in Paris:

July 14th: For Liberte, Equalite et Fraternite- Fete du Nationale or as most people refer to the holiday-Bastille Day. The storming of the Bastille prison is marked this day as the beginning of the French Revolution that saw France turn on its head. Every year I get to celebrate it and it’s fun. Celebrations are city wide-the most crowded spot of course is at the Tour Eiffel for the fireworks show, but the most impressive view I think is from Parc Belleville in the 19th arrondissement. Any way you celebrate will be grand even if you just toast to each other in a corner café.

Throughout July is the Paris Jazz Festival that takes place in the Bois de Vincenne’s Parc floral. International and traditional Parisian jazz is played and it’s all divine.

Cost: Airfare and lodging is at its highes cost. Book early to save. Although some people think August is not the time to go, I believe it is. I’m there every August. All the tourist attractions are open, so as a tourist, you won’t feel as if everything is shut down. You will even get a seat on the metro.  It affects me more as a part timer-many of my beloved restaurants in my neighborhood are closed. But as a tourist, you might very well enjoy the city when it’s less hectic. 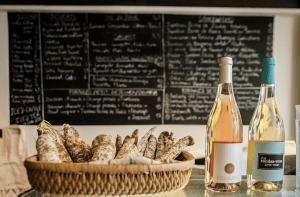 Personally, I think this is the best time to be in Paris.  The tourist crush ceases and the people of Paris return to work and school and everything is in full swing.  September does bring many conferences and conventions to the city and it is also Fashion Week, so book ahead for accommodations. But the city itself won’t feel overrun.

The weather can be truly awesome at this time of year. The summer heat is gone and yet it is still warm enough to get away with a light jacket for September and half of October. In the latter part of October and into November, you will need a more substantial coat and perhaps a light scarf, but it isn’t particularly cold.  Wear layers.

Gout de France takes place over one weekend in late September. The best of French gastronomy is on display at various venues-some are only open to industry professionals, but as a tourist there are events open to you too. Check local listings

In mid-October, the Grape Harvest Festival happens up in Montmartre and you may partake in the local wine that is made by the smallest vineyard in France.

Special reasons to be in Paris:

Nuit Blanche de Paris. On the first Saturday in October, in all parts of the city, artists have installations, exhibitions and concerts late at night. You’ll see the city in such a different way

European Heritage Days: Over one weekend in September, numerous cultural and historical sites open their doors when the rest of the year they are normally closed to the public.  It’s a rare opportunity to see the interiors of buildings you normally would not have access to. One year I got to see the classrooms of the Sorbonne that are normally off limits.

Although September and the first half of October are still considered high season, the prices come down a bit for airlines and lodging. As always, book as early as possible for the best rates. During Fashion week in September, the city hotels fill fast, so be sure to arrange your room as soon as you can.