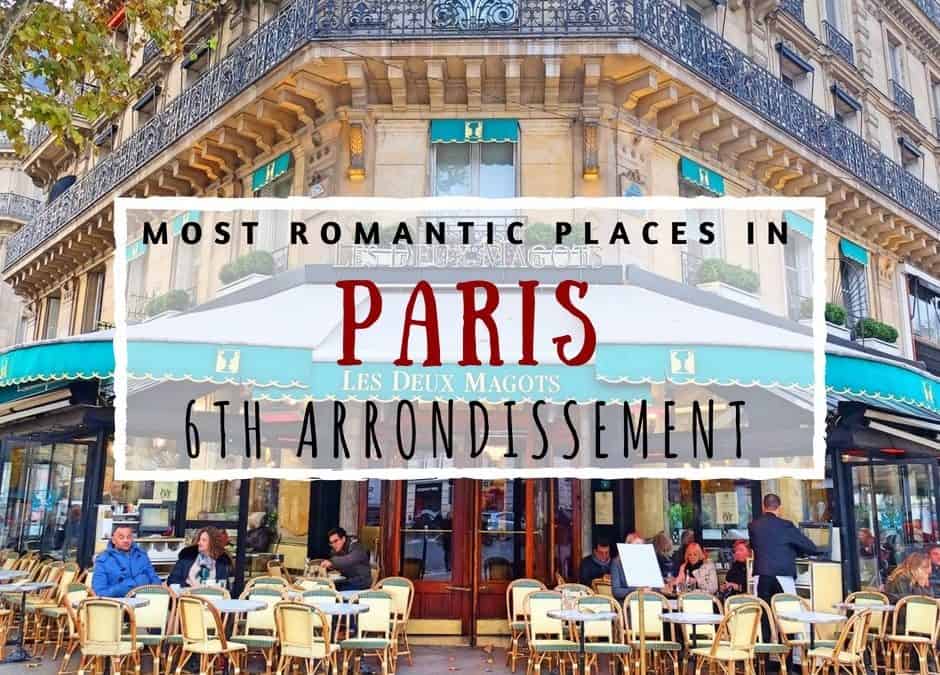 When most people think of Paris, visions of the narrow streets and cafés of the Left Bank come to mind, and more precisely, those of the 6th arrondissement. The artistic and intellectual hub of the city at various times, the 6ème has both big name stars like Les Deux Magots and the Café de Flore, but also discrete contemporary cocktail bars, stylish restaurants and hidden places beckoning lovers. As with the other articles in my Romantic Paris series, I’ve scoured the neighborhood to bring you a collection of unique and magical places for a romantic discover of this incredibly Parisien quartier. 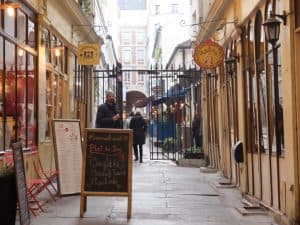 Few places get as many awes from the new beholder as the exquisite Cour du Commerce St André. Running between rue Saint-André des Arts and Boulevard Saint Germain, the romantic cobbled lane has a small covered section on the north-end, an early version of the covered passageways around the Opera district. Beyond this is the legendary Procope, opened in 1686, it’s considered the oldest “café” in Paris and was popular with Enlightenment philosophers then Revolutionaries (visit the street to see some paintings of its most famous or infamous customers). Opposite from it, you can peer into the window (or stop in for some delicious hot chocolate) of Un Dimanche à Paris, whose back wall contains the remnants of watch tower of the late 12th century Philippe Auguste wall. There are more secrets to it, plus café terraces and shops which make it the ideal romantic detour in the area. 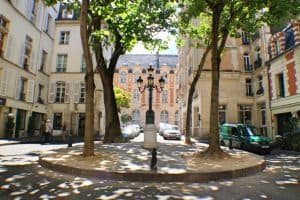 The dense northern part of the 6th has few open spaces, however, the few it has are terribly romantic, like the tiny jewel Place Furstemberg (also spelt with an “n”). The square is actually part of a street of the same name, called after the cardinal Guillaume-Egon de Fürstenberg, who wanted a private access to his palace at the nearby Saint-Germain-des-Près Abbey. One of its charms lies in its hidden location, but it is also utterly charming with its large Paulownia trees and lamp post in the centre, pretty shops, and in the north-eastern corner, the former studio and now museum in honor of Romantic era painter Eugène Délacroix—how fitting for your “romantic” stroll! 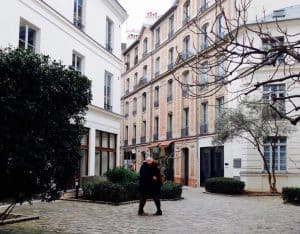 Another perfectly romantic secret spot in the neighborhood is the hidden Passage Dauphine. The pedestrian laneway dissects rue Dauphine and Mazarine and will certainly charm your unbeknownst sweetheart. Open in 1825, in the city’s boom of passageways, it differs from many of the other passages as it is wider in the center, and isn’t covered in glass. Today it’s an ideal place for a lovers’ break during your 6ème stroll, you can even stop in for a beverage and snack at the lovely tea salon, L’Heure Gourmande, to further absorb the passageway’s romantic vibes.