My Spirited Interview with Queen of Cocktails Forest Collins

by Robyn Webb | Voices of Paris 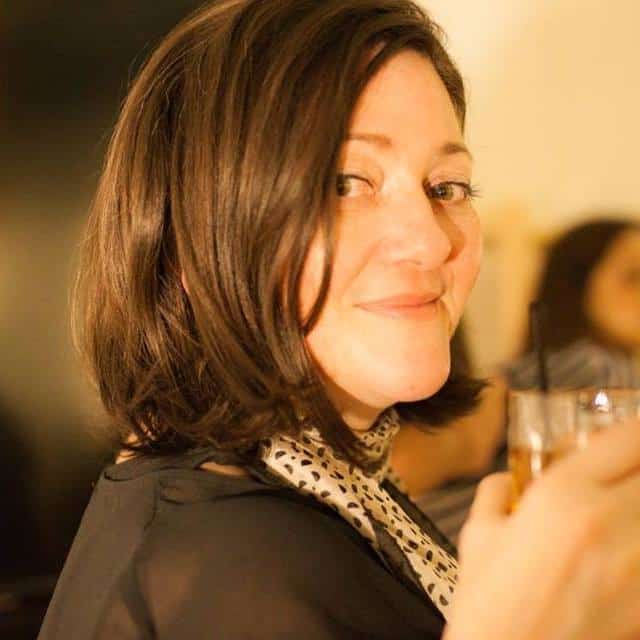 The queen is alive and well in Paris … the queen of cocktails that is!

It’s no other than Forest Collins, the doyenne of the cocktail scene in Paris and founder of 52Martinis.com, an online guide to the best cocktail bars in Paris and other small batch boozy news. Forest also recently released the Paris Cocktail app.

Find out how this trailblazer in the cocktail scene feels about the growth of the alternative-to-wine-focused France market and under what circumstances she’ll use the trendy term “mixologist.”

Robyn: Paris, and France overall, are usually known more by the Bordeaux’s and Burgundy’s not necessarily its Bloody Mary’s. So how did the cocktail scene take form in Paris?

Forest: I would still say that France is a wine culture. But France has also followed the global reach of cocktails. As the cocktail scene grows in other world locations, Paris is following suit. But it was initially slower to catch on because of the wine culture, which is still so strong.

R: Harry’s New York Bar and Bar Hemingway at the Ritz probably can be credited for popularizing the American English cocktail scene as early as the 1920s but today’s cocktail scene in Paris goes beyond these two iconic bars. What’s different in the scene today versus the early 1920s?

F: In the 1920s there was a demand for cocktails. But after prohibition, when no one then had to hide out any longer, the allure of the cocktail faded and we began what I like to call the dark ages of cocktails. In fact, the1950s through the 80s was a pretty sad time for cocktails. In France, the decline of cocktails was more eagerly embraced because of the wine culture. But now France is taking ownership of cocktails focusing on French spirits. Back in the 20s bars such as I mentioned earlier were focused on American drinks, calling them American cocktails. Whereas now the current bartending community is really making it French.

R: That’s a perfect lead in to my next question: martinis, mojitos and cosmos wouldn’t necessarily make any bar in Paris unique, so what’s the spin or angle that the Paris cocktail scene possesses that makes it worth going experiencing versus a bar de vin?

R: What movements do you think contributed to the emerging cocktail scene? How has the sophistication in our food choices affected the kinds of drinks that mixologists prepare?

F: Oh, I think that movements such as slow food, being green, artisanal and small batch have helped to create the Paris cocktail scene. And France being France, we are lucky to have the freshest products.

R: Speaking of mixologists, do you like that term? What ever happened to the good old term bartender?!

F: I don’t use the term mixologist, I still prefer to call a bartender a bartender. I think the use of mixologist came about the time craft cocktails were emerging and the term was being set forth to differentiate the bartender who wanted to say, “I don’t just make mixed drinks, I make drinks of higher quality.” It was shorthand way of explaining that I go above and beyond. I create special, unique, craft cocktails. There was a backlash from it partly because the term sounds kind of ridiculous, but I get the gist. I personally wouldn’t use the term in conversation but would use it in writing. Generally, in Paris the person who works the bar still refers to themselves as a bartender. Actually, the term “mixology” took off in Paris, but not necessarily widespread use of the term “mixologist.”

R: Do you think Parisians are more curious and willing to try new things than ever before? Or do you think tradition still rules? How has the cocktail scene either capitalized on the quest for new or how has it been challenged by tradition?

F: The French still are traditionalists. The cocktail is geared towards more trends with younger people who are willing to experiment. But tradition still rules; there are less than 100 cocktail bars in Paris that are new and innovative, but there are a few thousand wine bars, so the cocktail scene is still a small part of the average Parisian’s experience. What will help increase the popularity of the cocktail scene is not the Parisian population, but rather the big brands behind the drinks. Havana Club pushes mojito, the aperol spritz is pushed by Aperol. So, it’s not because the French public is so curious, but they will be influenced by the brand, pushed from the supplier side. In this way, new cocktail innovations won’t be so frightening to the average French.

R: Is a Paris cocktail bar a good pick up place?

F: Ummm … I don’t really think so … it’s not like a bar to chat. It’s a good date place, but not a place for a pick up. People concentrate on the group they came in with in these places and on their drinks. Most cocktail bars are not set up for free-flowing chatting. There are better places for a hook up – like an Irish pub.

R: You are the creator of the 52 Martinis Cocktails App, which is the definitive guide to the best cocktails in Paris. But it’s a selective list, how did you narrow down the possibilities? How many years did it take you to put the list together and what was your research process?

F: I’ve been researching since 2007, so that’s a decade of getting familiar with the scene. My process is straightforward, I try out different cocktail bars and often have friends come with me to try the cocktails, thus the establishment they are made in must be on par with global cocktail scene. That is one of my criteria. I start with a martini first and then if they can do things off-menu, I know the bartender has a good solid background. Next the service and environment must be good; comfortable and friendly. A great place will make the client feel looked after, maybe even provide a little cocktail education. For tourists who don’t speak any French, almost any cocktail bar staff will speak English because it’s a younger crowd. It is even easy to go solo and sit up at the bar. 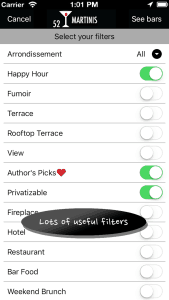 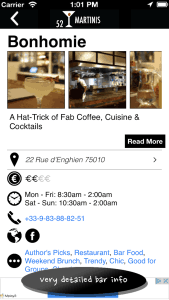 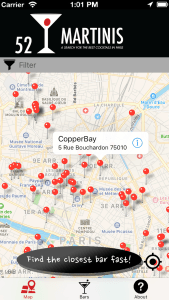 On the app, I label the bar with different tags, so you know what will be comfortable for you in relation to your age and lifestyle. That’s what is unique about the app versus un-curated large lists like from Yelp or Trip Advisor. It’s a small list, designed by a cocktail expert. There will never be more than 100 bars on the app and, frankly, I don’t think there will be more than 100 exceptional places.

R: When did you become interested in the cocktail scene?

F: My interest in the cocktail scene was always there. I was always a foodie … which is a term I do use! … and that contributed to my passion. When I first came to Paris, I focused on the wine scene for three to four years. I travel a lot and so I first checked out places in other world locations before the Paris cocktail scene emerged. Then I decided I wanted to find cocktails in Paris. From there I tried a new place every week, more for personal reasons. But then I started recording my experiences on a blog because it was a convenient way to share. So, it was a personal journey to start with and now I share it with many, many enthusiasts.

R: What role do you want to play and be acknowledged for in the ever-growing cocktail movement?

F: I was one of the forerunners to introduce a large Parisian public to cocktails, an early influencer. I like to hope that I will remain an honest voice for cocktails in Paris.

R: Name your three top drink choices for a cocktail evening out in Paris?

F: For classics, I like a martini, a sidecar … which is a classic featuring French ingredients … and an old fashioned.  My choices for more creative cocktails vary pending the cocktail bar. For instance, the smoking sidecar at the Syndicat, a cocktail that is a smoked, modern interpretation of the sidecar. is one of my favorites; creative and unique. Also, I would try the la gueppe verte at Candelaria and the bamboo crane at Mabel, both are modern classics worth trying on your next trip to Paris.

R: Ok, now onto the lightening round … Absolut or Smirnoff?

R: Dress down or to the nines?

R: What cocktail does your boyfriend drink?

F: He likes rum cocktails, but he is more of a beer and wine guy.

R: Describe in one word your approach to creating a cocktail?

R: Straight up or on the rocks?

F: Dinner party, but I never start one without aperitifs … so, both!

“Queen of the Paris cocktail scene”, Forest Collins, is the founder of 52martinis.com, an online guide to the best cocktail bars in Paris and other small batch boozy news, and has recently released the complimentary bar guide iPhone application, Paris Cocktails. As a freelance drinks writer, she has written for Drinks International, Serious Eats, World’s Best Bars, and PUNCH drinks about the Paris cocktail scene. She regularly judges cocktail competitions and especially enjoys carrying out interviews with interesting industry personalities for her audio show/podcast, Paris Cocktail Talk.